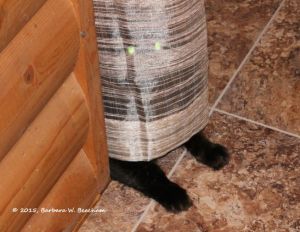 This is my contribution to this week’s Monday’s Finish the Story, brought to us by Barbara Beacham. Finish the story begins with : “He thought he found the perfect hiding spot.” He thought he found the perfect hiding spot from which to plot his escape plan. He had overhead the slaves discussing V.E.T today. Pfft. Do they really think that cats can’t spell? He knew that simply hiding in the lair wouldn’t work, because the slaves, despite appearances were smart enough to find him. Plus there was also the issue of food, so he couldn’t just hide in here forever. He extracted a set of claws and tested them against the leather lounge. Not bad. But over the years, the slaves seemed to have become impervious to threats and actual demonstrations of violence. More was needed. But what? He flicked his tail back and forth, running through the scenarios, until it came to him. Of course. He jumped onto the kitchen benchtop and dragged the car keys into his mouth, careful not to bite into the stupid squeaky keyring. A few minutes later, the deed was done. The keys buried deep within the litterbox, never to be found. With a satisfied swish of his tail, he pushed open the nearest bedroom door and hopped back into bed. 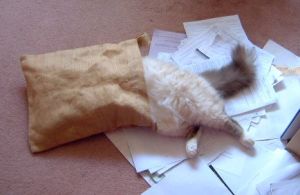 This is my cat Brutus, demonstrating his version of the Cat in Bag. He’s 16 now, so (hopefully) his evil plan hatching days are behind him 🙂

31 thoughts on “Monday’s Finish the Story – The Plan”

The Best Short Stories on the Internet

The Fantastic and Mundane Chronicles of an Aspiring Writer

Your story matters -- because you do.