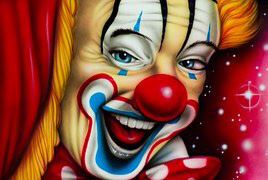 Here’s my contribution to this week’s Flash Fiction for Aspiring Writers  prompt from Priceless Joy. Thanks once again Joy..

Fred cleared his throat nervously in the silence. His allergies had been playing up all day, and the tickle at the back of his throat was becoming unbearable. His eyes began to water as he fought to keep from breaking into a coughing fit. But the prize was so close now, he had to hold himself together.

The others stood around him in a circle – hoods drawn down over their faces. Only their shoes gave away their vocation.

“It is time.” A hooded figure broke away from the circle and walked over to Fred. “Bring me the Nose.” Another hooded figure approached, holding a black velvet cushion. Fred stared transfixed at the shiny red nose which sat atop the cushion.

The hooded figure picked up the nose and held it high. Behold Brothers, the mark of the Clown. He stooped down and affixed the nose on Fred. From this day forth, you will be known as Frozo. Welcome Brother.

Frozo sneezed, his shiny new nose flying off into the smoke filled room.